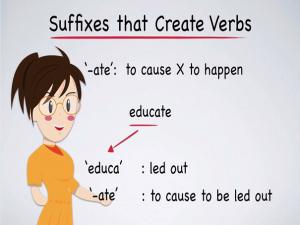 For reference: a suffix is a part of a word that is attached after the root. Both in English and Russian they can be:

By the way, if prefixes almost do not form the words of the new part of speech, our today’s heroes do it very often: awe => awful. So we will consider the suffixes according to the parts of speech in English:

First of all, let us consider morphemes that form nouns with the value of the device or person performing the action.

Suffixes -er, -or, -ar
Very productive affixes. Can form both inanimate and inanimate nouns. From the verb (i.e. action) they form a noun (actor).

Note that usually the producing word does not change in any way: author – authoress. But there are exceptions: actor – actress, ambassador – ambassadress and others.

We’re done with the suffixes of “figures”. Let us move on to the other noun suffixes in English.

This English suffix is very productive.

Suffix -cy
Creates abstract nouns with the value of a state or mode.

Suffix -ing
It forms nouns from verbs, for example:

Suffix – meaning.
Forms nouns with the value of an action or process, product or result of an action, as well as a state (including the state caused by an action).

Suffix -ness
The suffix of the English language indicating status or quality: